How to use True Center Band indicator on Daily charts.

True Center Band is specially designed to work on intraday and daily chart.

If you want to ride the wave, you must be able to see the wave first. There is no doubt that TCB is the right indicator to get the job done.
The center line shows the trend of the price within a given period, and the bands indicate the possible price range between overbought and oversold areas.

Now, let’s see how to use it on Daily charts.

When is the best time to entry?

In my opinion, the circled area is the best time for a long position to be established.
Why not entry right after the oversold breakout?
Because if you enter at the first breakout, there may be a 2nd breakout waiting for you.
The circled area confirmed the reversal trend, so that’s a better entry point comparing to the previous two  breakout areas.
On the right side of the chart, I highlighted an entry point for short, if you are familiar with chart pattern, then you will know it’s a Head-shoulder pattern.
The Head part fall back to the center channel before touching the overbought channel.
Prior to formation of head-shoulder pattern, the price moved in the center channel, and there were a couple of instances break through the lower buffer channel, however given there was no upward breakout formed, the Head-shoulder is clearly a pump and dump.

As you can see these blue arrows in the chart below, showing the price trend and the direction of TCB are opposite — we have a slope divergence situation. 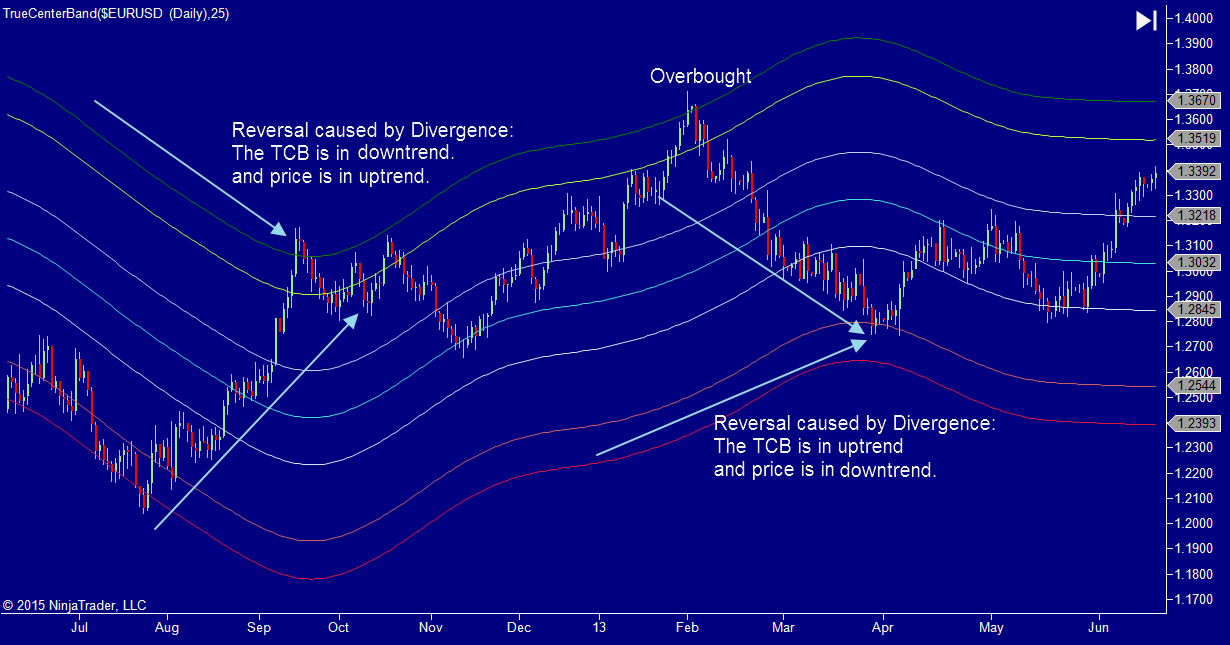 As shown in the chart below, at both positions (1) and (2), the price was quickly pulled up before it crossed above the overbought channel.
There is a high probability that the price will go down in a situation like this.
The price falls back to the oversold channel from position (1) to position (3), unfortunately, you can’t be certain whether the price will bounce back after hitting the oversold area.
However, a W bottom pattern, which has served as a strong reversal signal at (3) definitely makes the situation clearer. 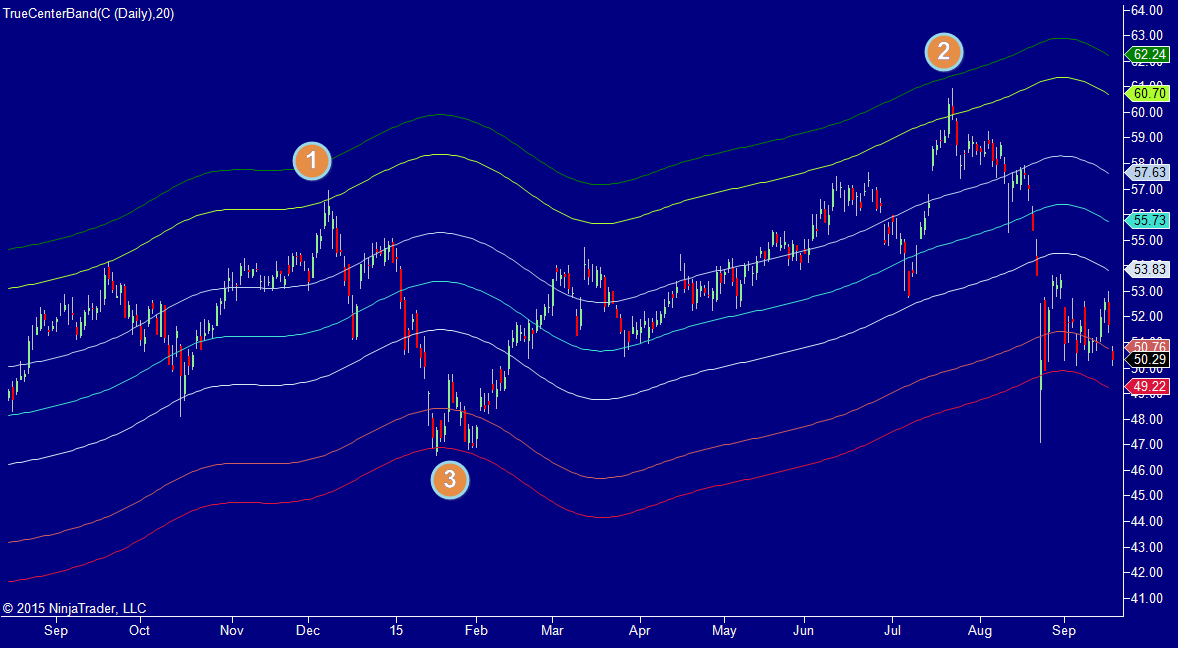 Overbought at (1) which is a good entry point for short, and Oversold at (2) where we should close the short position and enter long.

Take a look at the chart below, it’s a daily chart of MSFT from October 2013 to October 2015.
The price fall after it crossed above Overbought area at 1,2,3,4,5,6.
And reversal at 7 and 8 when price crossed below oversold channel.

The chart below is LNKD Daily chart from 2014.2 to 2015.9, both (1) and (3) are good for long, and (2) is good for short.
Between (1) and (2), there also are couple times that price cross above the upper buffer channel, but they are not good entry points.
Because these points are not overbought, if you short in ‘upper buffer channel’ there is chance that the price will continue to go up.
I’m not saying that the price will definitely fall when it hits ‘top upper line’, but the probability is quite high.

The following pictures are examples of how price reacts when it cross over upper and lower channels. 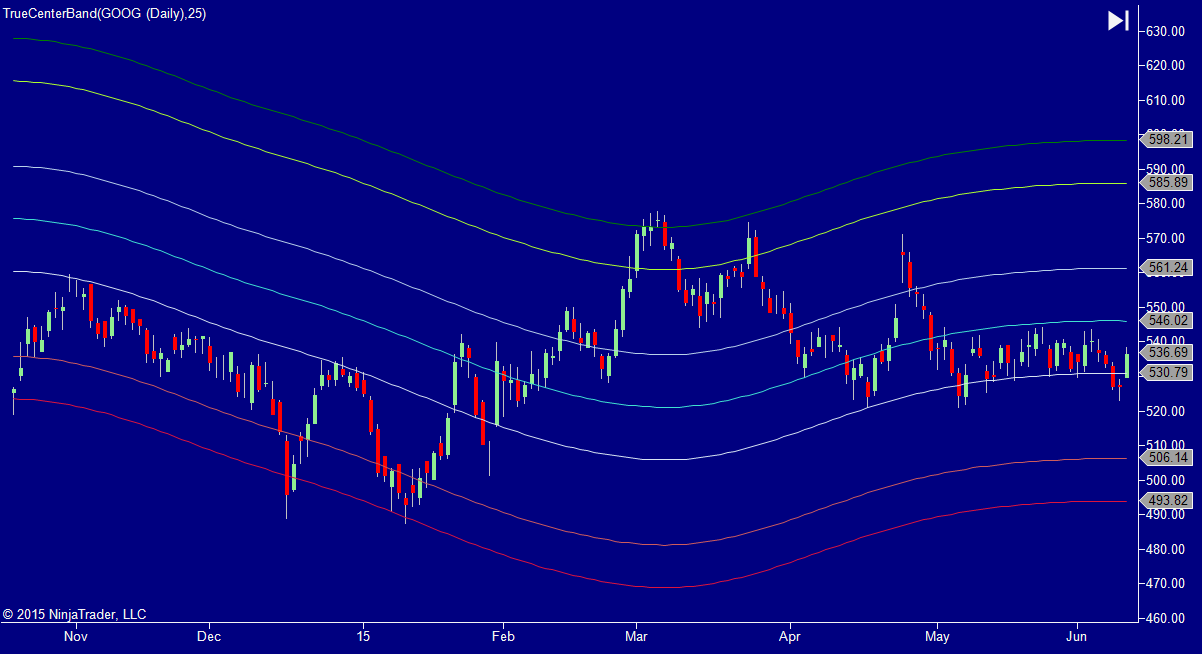 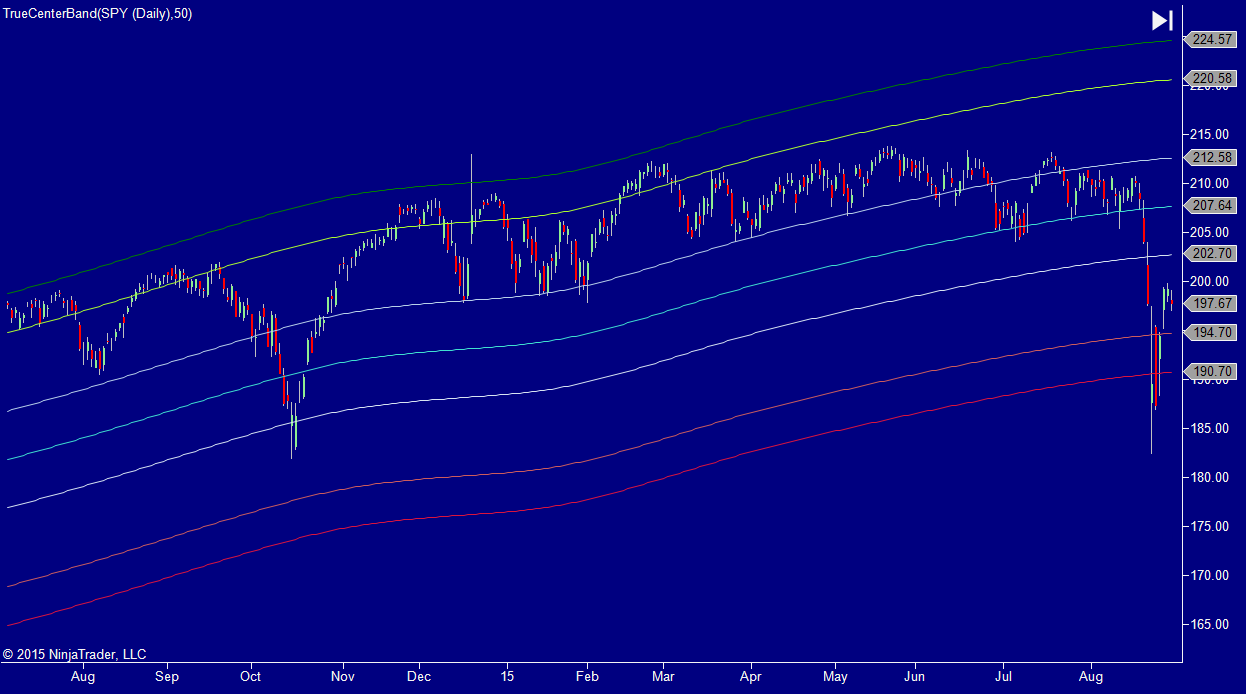 One Response to How to use True Center Band indicator on Daily charts.

This site uses Akismet to reduce spam. Learn how your comment data is processed.

Our primary services include:

We use cookies to ensure that we give you the best experience on our website. If you continue to use this site we will assume that you agree to it.OkPrivacy policy